In 2003, the HSE referred to a report which estimated that around five million people are exposed to hand-arm vibration at work, and of those, as many as two million might be exposed to levels of vibration that risked injury.

For many years, the awareness of the effects of hand-arm vibration was limited and the consequences of exposure were not regarded as particularly serious.

In the case of Doherty –v– Rugby Joinery(UK) Ltd, the Court of Appeal held that in the woodwork industry, the Defendant employer was under no duty to assess and monitor its employees for symptoms of VWF before 1991/1992.

What are the symptoms of Vibration White Finger / Hand-Arm Vibration Syndrome?

Vibration white finger and hand-arm vibration syndrome describe a selection of symptoms with an underlying pathology. Workers regularly exposed to vibration may suffer from symptoms due to effects on the vascular system, nervous system, muscles, and other tissues. 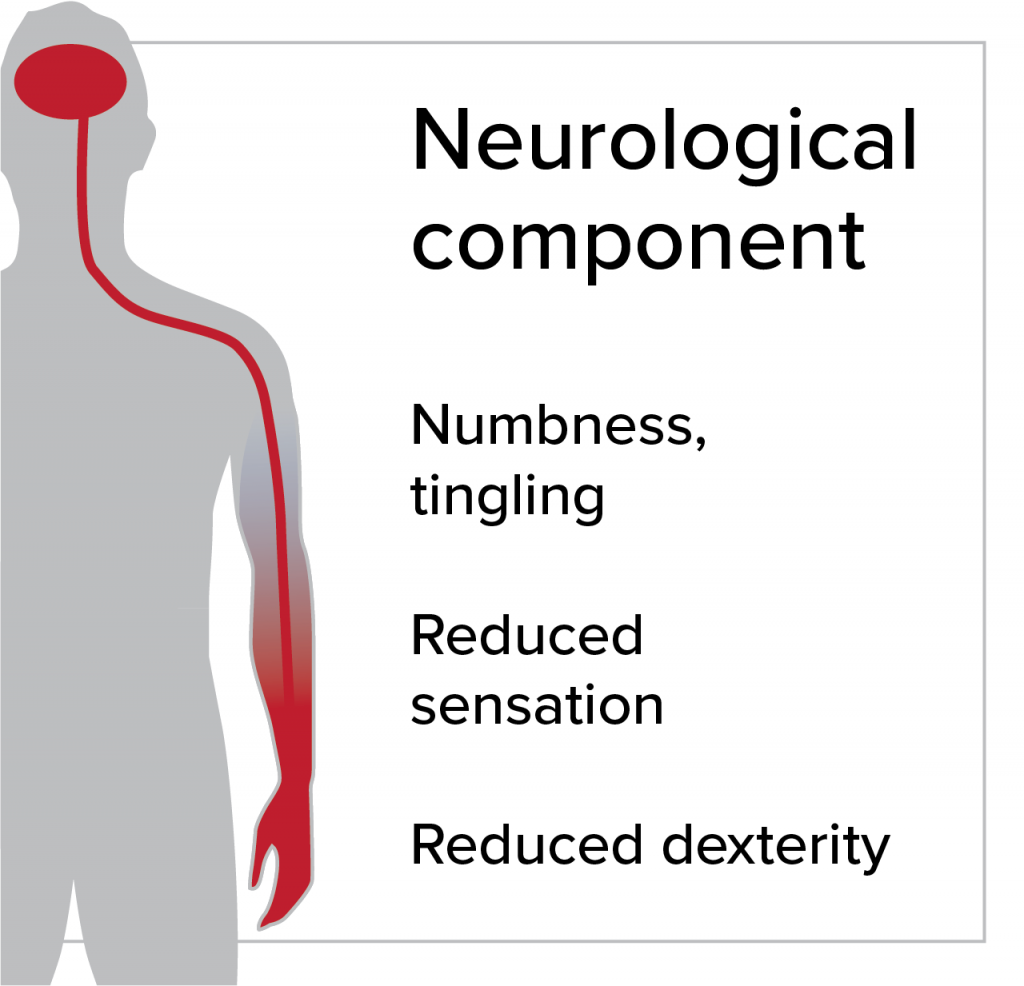 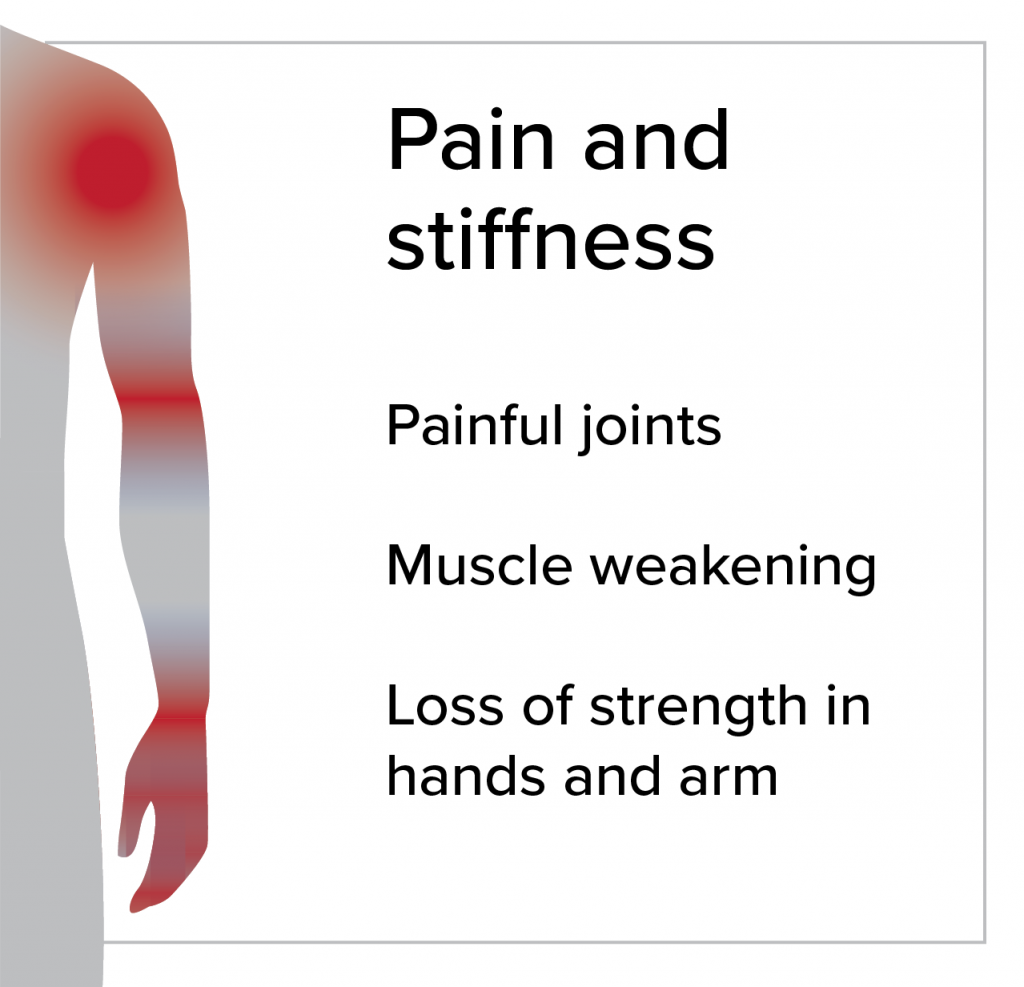 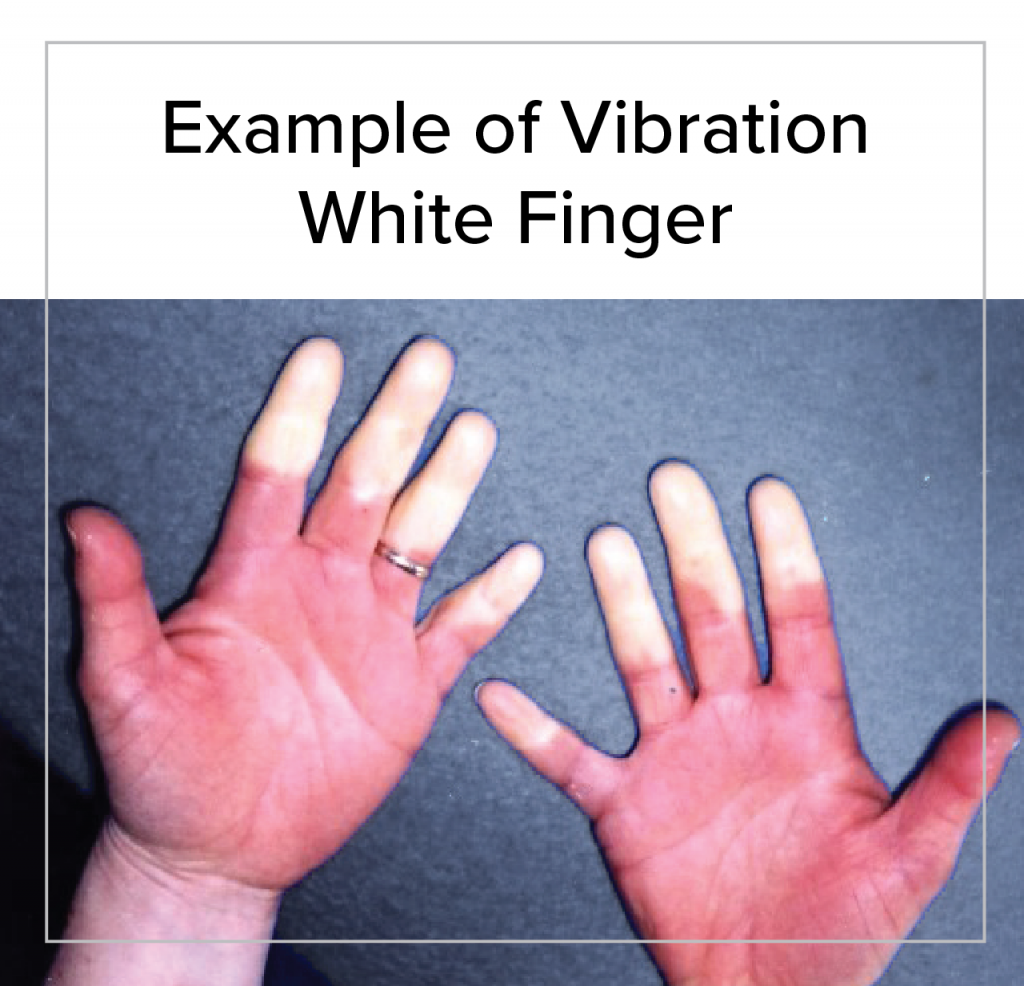 You do not have to have the full range of symptoms to be diagnosed as suffering from HAVS. Neurological symptoms often occur first, but this is not a set rule.

Difficulties can occur because symptoms constituting the syndrome can arise for constitutional reasons and there is no objective test to establish presence of syndrome. Diagnosis, therefore, involves a three-stage process:

What is the Duty of My Employer to Protect My Health?

Under the 1974 Health and Safety at Work Act, every employer has a duty so far as is reasonably practicable, to ensure the safety and welfare of employees.

In 1994, the HSE published guidelines referred to a standard based on an action level of A8 of 2.8 m/s. The 2.8m/s is the average vibration level over the course of an eight hour day. At that level, ten percent of people exposed for eight hours a day for eight years would experience symptoms of finger blanching, and the exposure would be foreseeable.

Work with vibrating tools is rarely continuous, and as such the time of exposure (‘trigger time’) must be considered.

In 2005, the statute the Control of Vibration at work Regulations 2005 was passed and implemented from the 6th of July 2005. This act set two exposure limits:

The EAV is the maximum amount of vibration an employee may be exposed to before an employer is required to take certain action to reduce exposure. These actions may include (Reg 6):

Below is a table to assist in calculating whether the ELV has been reached: 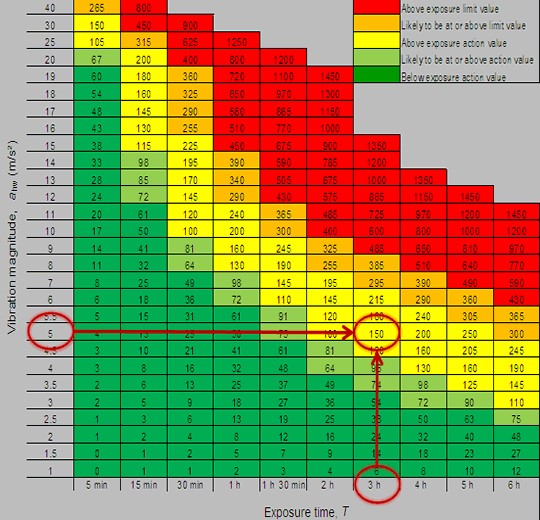 Basically, by adding up all your daily exposure you can identify whether you are likely exceeding the ELV.

On a daily working basis, Mr. A will use a demolition hammer for half an hour, followed by hammer drills for three hours.

Demolition hammers: levels likely – 15 m/s exposure from this work for half an hour = 225 points.

The number of points together would exceed 400, and therefore it is likely the ELV is being exceeded or likely to be exceeded. This is an extremely useful tool to undertake an initial assessment on the level of daily vibration.

How Do I Make A Claim?

If you have read the above and feel that you may be suffering from any of the symptoms of vibration white finger or hand-arm vibration syndrome whilst exposed to vibration at work, contact us to speak to our dedicated Industrial Disease team.

In order to run the majority of Personal Injury claims, you have to have started the claim within three years of the injury. However, with Industrial Disease claims, it may be that the injury started over a period of time and was only diagnosed within the last three years. We will be able to clarify this for you.

Will I Lose My Job If I Make a Claim?

If you are still working for the Defendants, they cannot dismiss you for making or proposing to make a claim. If your employer attempts to do so, then you are likely able to make a successful unfair dismissal claim. In our experience, the high majority of insurers understand their duties owed to you and the right you have to pursue a claim for vibration white finger or hand-arm vibration syndrome if this duty has been breached.

In the majority of matters, the claim will normally be transferred from the Defendant directly to their insurer, and it will be the insurer who deals with the Defending of the action.

How Long Will My Case Take?

The length of time for a case can vary and can strongly depend on how Defendants and their insurers want to defend the action. It may take a considerable time to identify insurers for the Defendants if they are no longer trading, and the obtaining of expert evidence from a vascular surgeon and an engineer can also take a considerable amount of time.

We will also need to obtain the full list of your past employers from the HMRC, can also take time to obtain. A vibration white finger or hand-arm vibration syndrome case can take anywhere from twelve months, up to three or four years to reach its conclusion.

Why Use Oakwood Solicitors to Run My Claim?

We have a very experienced and dedicated team of people in the Industrial Disease department. They are able to identify whether a claim is likely to be viable at an early stage and give advice accordingly.

The team works with an extensive network of vascular surgeons, engineers, and hand surgeons. They have dealt with a number of claims in all areas of industrial disease and achieved some excellent results.

How Would My Case Be Funded?

Our cases are brought on a no-win, no-fee basis. If we accept your claim – as long as terms of the agreement are complied with by yourself, namely that you do not mislead and you co-operate, there will be no charge to you in the event the case fails. If the case succeeds, there will be a deduction to be made from the damages.

Could I Have Any Associated Claims?

If you have been working with tools/work equipment that expose you to dangerous levels of vibration, it could be that you have also been exposed to dangerous levels of noise from the same machines. If so, you could have been exposed to high levels of noise that have caused irreversible damage to your hearing levels. You may wish to look at our Noise-Induced Hearing Loss page to consider any other claims you may have.

WHAT TO DO NEXT

For any advice on Vibration White Finger (VWF) and associated conditions, get in touch today for a free initial consultation. Choose one of the methods on the right-hand side of this page, or call us on 0113 200 9787 to find out how we can help you.

Request a call back
Enquiry form
Email us
Service finder

Meet the Head of Department

Solicitor and Head of Industrial Disease

Get in touch in a way that suits you:

Request a call back

Use our Enquiry form to get you on the right track:

Reach us by email:

This website uses cookies. You can read more information about why we do this, and what they are used for here.