Pedestrians are considered to be some of the most vulnerable and at-risk road users there are. The potential of sustaining a severe injury to a pedestrian hit by a motor vehicle is very high.

Being hit by a moving car, even at a relatively low speed can easily result in severe soft tissue injuries, fractures to limbs, head injuries or scarring.

I was hit whilst crossing the road. Do I have a claim?

Fast-moving vehicles, whether it be a car, van or lorry, could be seen as a dangerous weapon. So, the duty of care often falls more heavily on the vehicle driver than it does the pedestrian for the obvious reason that metal is harder than skin. So, it is likely that if you were hit by a car you have a personal injury claim.

Whilst in some situations liability can be apportioned on a split liability basis, it can often be more favourable to the injured pedestrian. However; this does not warrant carelessness by the pedestrian and there is still an expectation that pedestrians adhere to the Highway Code:

Does the accident need to have happened at a designated crossing to be able to make a claim?

Drivers are always expected to carry the greater duty of care and so in accidents where a pedestrian has not used a crossing, it is likely that if the driver was at fault in any way (i.e. excessive speed) they may take some of the responsibility. For example, if a driver was travelling 10mph over the speed limit and collided with a pedestrian who ran over the road when the ‘Green Man’ was on red, liability is likely to be shared between the driver and pedestrian.

If a pedestrian chooses not to adhere to one or more of the guides within this sensible code, then it is more likely that the liability apportionment they will need to accept will increase.

Do I need to have a witness?

A witness is not crucial to a Road Traffic Accident, but it can be favourable when there is a dispute as to how the events leading up to and after an accident are disputed.  Having a witness will undoubtedly help your case; particularly if the witness has no conflict of interest. Generally, a road traffic accident can be one person’s word against another’s – so the introduction of an impartial witness can sometimes make or break a claim.

It is also important to recognise that the account given by you as the injured victim can also be extremely important and if a consistent version of events is given, the account may well be preferred over that of the vehicle driver.

Should I have reported it to the police?

Any incident where a pedestrian (or driver for that matter) was injured should be reported to the police as the police may need to block roads and create access for ambulances in the case of serious incidents. Whether the police are likely to prosecute anyone really comes down to whether a crime has been committed. It could be that a pedestrian has been severely injured, maybe even killed, but through no fault of the driver.

On the other hand, it could be that a driver was travelling at 30mph in a 20mph zone and the pedestrian’s injuries are minor, in this instance the crime of speeding has been committed and so prosecution is possible.

The information contained in a police report can assist greatly in determining liability. There could be witness evidence contained in the report, diagrams showing skid marks, pictures showing the resting position of vehicles and the exact location where the impact took place.

Clearly CCTV will be a huge help in determining who is to blame for an accident. If enquiries are to be made about CCTV, it is important that enquiries are made quickly with local shops, offices of the council responsible for overseeing the location. If enquires are not made promptly, the footage may be destroyed.

With some pedestrian claims, can they settle where both parties take a share of the blame?

As previously mentioned, a driver’s duty of care is regarded as higher than a pedestrian’s. Often, even in cases where the pedestrian is at fault, the driver and pedestrian take a portion of the blame each – otherwise known as a “Split Liability”. The proportion to which the liability is shared ranges drastically from case to case and is prevalent on the facts and can be split anywhere from 90/10 – 50/50.

A pedestrian’s clothing should be bright/fluorescent at night time or on days where visibility is clearly hampered (such as foggy conditions).

The age of the pedestrian is also an important factor in these types of Road Traffic Accident claims. For example, it may take significantly longer for an old person to cross the road than it would a young person.

It is expected that road users are sensitive to this and do not set off as soon as the lights go green. Instead, they must wait for the pedestrian to safely cross the road. Equally, young children (who are often careless in their approach to crossing roads through sheer lack of experience) should be treated with a similar amount of sensitivity by drivers.

If they can see young children on the side of the road, drivers should be wary and perhaps reduce their speed to compensate for potential youthful recklessness.

Vulnerability is also a key aspect of a Road Traffic Accident. I’m sure you can imagine it would take someone in a wheelchair, or with walking difficulties longer than an able-bodied person to cross the road and again, this sensitivity is an expectation of road users.

Drivers are expected to be particularly wary around school areas, as there is a high influx of children either leaving or arriving at school, which results in a high risk of incidents due to the younger generation’s occasional obliviousness to danger.

Are there examples of other cases involving pedestrians that are important?

Looking at some relevant case law (cases that have been to court and been reported on) may be of huge importance to a potential pedestrian claimant as, if the facts of the case are similar, the outcome of the previous case will be used as a guide to assist with determining liability. Important cases to note are:

Snow v Giddins: ‘person who elected to not use a crossing took upon himself a higher standard of care’

This decision again comes down on the side of the pedestrian in terms of their negligence. Pedestrians should use the crossings provided without question. Though drivers should still be sensitive to pedestrians at all times, they are not expected to react to the voluntary whim of a pedestrian who has taken the risk of crossing the road where they shouldn’t cross.

Of course this does not mean the pedestrian can be held completely liable, but a failure to use a crossing will almost certainly mean some blame is shared with the pedestrian – except in cases where drivers have been overtly negligent.

Chapman v Post Office: ‘I see no reason why a person standing on the kerb is guilty of negligence at all; even if she leans out or has her back to turned to the oncoming traffic. Even if she went an inch or two into the roadway, I cannot see that would amount to negligence in the slightest.

‘The very fact that a van driver hits with his wing mirror a lady standing legitimately on the kerbside means that he is at fault and she is not.’

This case supports the idea that pedestrians are almost never at fault if they are on the kerbside as this is a designated space for pedestrians and vehicles have no entitlement to occupy that space.

If a car hits a pedestrian on the kerb the driver is at fault and should take all the liability, excluding circumstances where the pedestrian may be causing the accident by throwing things into the road or some other misdemeanor.

Scott v Clint: This case laid down the principle that once a pedestrian has stepped into the road, they have the right of way – no matter how suddenly or unexpectedly.

In this case, complete liability was given to the driver of the vehicle as when he was proceeding at 15 mph roughly 10 yards from the kerb, two children walked unexpectedly into the crossing and were struck. This is justified as it highlights the guiding principle that drivers should slow down when approaching pedestrian crossings.

Why use Oakwood Solicitors to bring a claim?

Oakwood Solicitors has been dealing with personal injury claims caused by car accidents since 2001. Many of our Solicitors and paralegals have been with us for over ten years, already having experience when they joined us.

We deal with claims that range between one thousand and hundreds of thousands of pounds, many of which will involve extensive claims for various kinds of expenses. When you instruct Oakwood Solicitors, you can expect a friendly, down to earth approach, together with an extensive knowledge of the field which will be used to fight tenaciously with the insurers to achieve the maximum level of compensation possible for you.

We are able to act for you on a No-Win, No-Fee basis, meaning that there is no risk to you, and you will not be charged if the claim is unsuccessful. 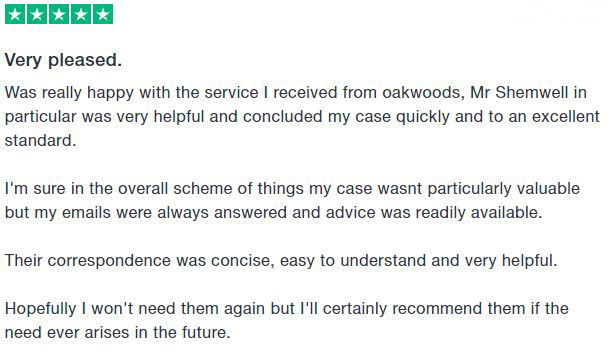 WHAT TO DO NEXT

For any legal queries about Road Traffic Accidents involving pedestrians, get in touch today for a free initial consultation. Choose one of the methods on the right-hand side of this page, or call us on 0113 200 9787 to find out how we can help you.

Request a call back
Enquiry form
Email us
Service finder

Meet the Head of Department

Get in touch in a way that suits you:

Request a call back

Use our Enquiry form to get you on the right track:

Reach us by email:

This website uses cookies. You can read more information about why we do this, and what they are used for here.